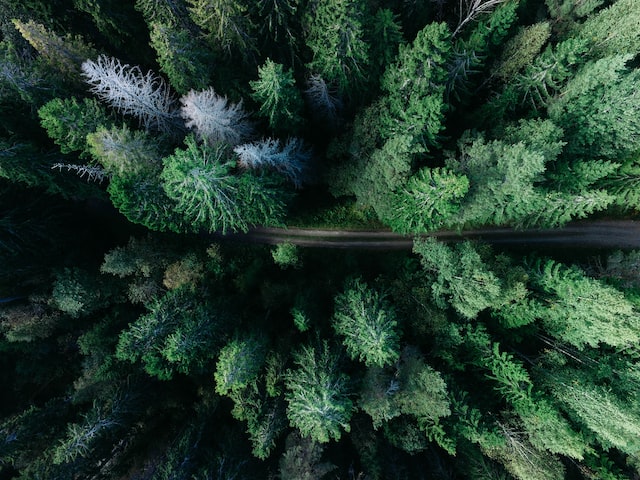 A journey back in time through the woods

Have you ever wondered what forests were like in the past? If suddenly a Templar travelling on horseback through a forest were to cross a rift in time and appear in the same forest today, would he notice difference? Would he see something strange? He probably would. And the fact is that the management of our forests and the relationship we establishwith them has evolved or changed over time.

At the beginning of Ridley Scott´s film “Kingdom of Heaven”, there is a scene shot in the Segovian forests of Valsain. In a fight that takes place on the banks of a river, the backdrop is an almost monospecific forest of Scots pine (Pinus sylvestris). Would it be strange to find 12th century Templars in a forest of this species? Not at all. In fact, we know that it is a species widely distributed throughout the northen hemisphere over time and quite abundant. But, despite being a native species, it is not a natural forest, as the distribution of tress seems to have certain “order”.There is a relative abundance of fairly young exemplars (the trunk is not very large in diameter) growing close together, with very little space between them. Behind this distribution is the hand of man, and in a productive system such as the Montes de Valsain, trees are planted in such a way that they grow tall, straight and as quickly as possible. Furthermore, the scene takes place near a river, where we might expect a riverside forest, but instead, this type of zonal forests has been displaced to favour the growth of conifers. It is therefore a forest under forest management.

But this management isn´t something relatively current at this time in Segovia. There are, in fact, documents that accredit management policies dating back to the 16th century: in an order issued by the crown, it was specified that

We can say that,for several centuries, management strategies aimed at soil conservation, pest management and obtaining raw materials have been applied in certain forests in our country.

Meadows are another good example of “artificial” forest that responds to the human management throughout history. And in this case, it is even older: our most emblematic landscape, which occupies some 4 million hectares in the Iberian Peninsula, dates back to the Paleolitic 2.

But it has been in more recent stages of our history that the most dramatic changes in forest management have taken place. Traditionally, the forest has been a source of wealth, food and energy for towns and cities, which in itself meant sustainable management. In many cases, need generates dependence, and dependence is what drives conservation. However, the rural exodus to the cities, the appearance of new alternative materials to the use of wood, new forms of energy, or the introduction of exotic species for industrial exploitation, led to a change in the management of forests and agricultural land, which has contributed to the deterioration of the rural landscape, the health of the forests and the lack of protection of the soil.

There came a time, therefore, when there was a need for organised forest management planning, a common strategy based on forest knowledge, the green economy and sustainability. In response to this challenge, the first forest governance bodies and tools emerged in the mid-19th century. During this period, for example, some figures were created, such as the Forestry Catalogue (1862), the First Forestry Law (1865) or the Public Forestry (1989) 3 .

Some of these tools are still in use today. But iberian forests are facing a new challenge that is motivating the need for a major change in forest management strategies. Climate change is putting the survival of our forests to the test and calling into question the way they are managed.

Larger forest fires are becoming more frequent and virulent. The accumulation of drier fuels, vertical and horizontal continuity, and persistent low humidity and intense heat make the spread of fire intensify and render the fire inextinguishable. On the other hand, forest pests and diseases proliferate more easily in individuals weakened by heat and drought (or fire) and spread to new geographical areas due to climate change.

And how do we face the future? We need to make changes in management and management strategies that are able to respon to the climate challenge of the present and the future. Thanks to technological advances, we have very powerful tools for data collection, modelling and prediction to bring adaptative forest management to a “virtual” level. Satellites, drones or sensors are the new working tools in the forestry engineering with which detailed and almost real-time data on the behaviour of forest can be obtained. But we also need to look back and recover traditional uses of the forest that allow us not only to protect it, but also to generate a sustainable local green economy as the forest did in the past, but with the advantage of being able to apply current technologies and knowledge.

To this end, it is essential to make progress in research and knowledge of forestry science and other related sciences, so that our forests endure over time and so that the forest that was the setting for historical films is not the setting for a dystopian future

At CARTIF, we work on projects that makes our forests better prepared and adapted to face a future marked by climate change. An example of this is the FIREPOCTEP project, which works to develop forest management strategies to achieve greater resilience to forest fires, while generating resources to support a local green economy. We also work on the early detection and control for emerging diseases, such as Phytophthora spp. in projects such as SUPERA and ForT-HIS.

4 John McColgan. Forest Service, an agency of the U.S. Department of Agriculture.